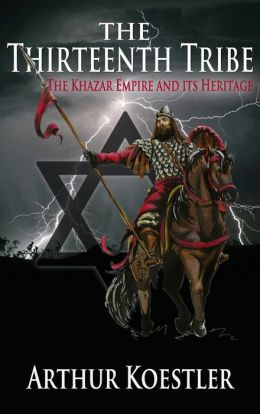 Recently I came across a book written by Arthur Koestler. The name of this book is the 13th Tribe.

Basically the book is about a nation at around AD 700, called Kazars. The land that they used to live in is named as Kazaria. This is what the book says:

The Khazar country . . . lay across the natural line of advance of the Arabs. Within a few years of the death of Muhammad (AD 632) the armies of the Caliphate, sweeping northward through the wreckage of two empires and carrying all before them, reached the great mountain barrier of the Caucasus. This barrier once passed, the road lay open to the lands of eastern Europe. As it was, on the line of the Caucasus the Arabs met the forces of an organized military power which effectively prevented them from extending their conquests in this direction. The wars of the Arabs and the Khazars, which lasted more than a hundred years, though little known, have thus considerable historical importance. The Franks of Charles Martel on the field of Tours turned the tide of Arab invasion. At about the same time the threat to Europe in the east was hardly
less acute . . . The victorious Muslims were met and held by the forces of the Khazar kingdom . . . It can . . . scarcely be doubted that but for the existence of
the Khazars in the region north of the Caucasus, Byzantium, the bulwark of European civilization in the east, would have found itself outflanked by the Arabs, and the history of Christendom and Islam might well have been very different from what we know.

The thing that is interesting is: Here you have a non-Jewish group of people with a massive empire, who used to do pagan worship. Then all of a sudden, they decide that they should have a religion that they should follow, and this religion should be monolithic. Due to what reasons, this decision was made and who was behind this, I don’t know but my opinion is that it had a political motive behind it.

Now they had for their neighbors , massive Muslim and Christian empires, adopting any of their relation, would have forced them into taking sides. So what they do is that they adopt the third largest Monolithic faith JUDAISM.

Our investigations cannot go into problems pertaining to the history of ideas, but we must call the reader’s attention to the matter of the Khazar kingdom’s
state religion. It was the Jewish faith which became the official religion of the ruling strata of society. Needless to say, the acceptance of the Jewish faith as
the state religion of an ethnically non-Jewish people could be the subject of interesting speculations. We shall, however, confine ourselves to the remark
that this official conversion – in defiance of Christian proselytizing by Byzantium, the Muslim influence from the East, and in spite of the political pressure of these two powers – to a religion which had no support from any political power, but was persecuted by nearly all – has come as a surprise to all historians concerned with the Khazars, and cannot be considered as accidental,
but must be regarded as a sign of the independent policy pursued by that kingdom.

The point here is that if this is in fact the truth, then a huge majority of the Jewery of today has in fact no relation with the Biblical “Shem”.